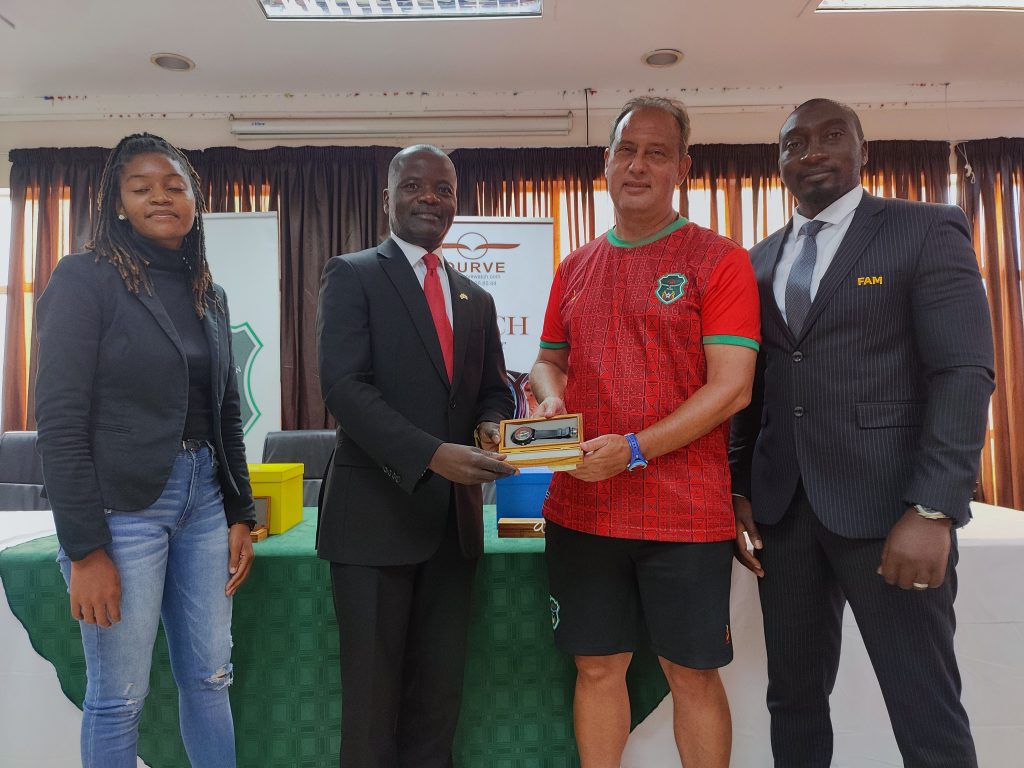 Qurve Watches, a Malawian owned company based in South Africa, on Thursday afternoon presented customized wrist watches to Malawi national football team players as an appreciation for their outstanding performance at the 2021 TotalErnergies African Cup of Nations.

Speaking when he handed over the watches to FAM, Qurve Watches’ Country’s Representative for Malawi, Peter Chetama said the company’s owner, Mrs Elizabeth Chetama Kandiado was pleased with the team’s performance at Afcon and promised to award the players.

“After watching the Flames show in Cameroon especially last group match against Senegal, it pleased the Managing Director of Qurve and Matt Arend Time Pieces Mrs. Kandiado to award the Flames as an appreciation to encourage them continue working hard.

“Today, we are presenting a total of 28 personalized wrist watches to every national team player who went to Cameroon, and we are in the process of producing some for the rest of the Malawi delegation that accompanied the team to Cameroon.

“The team made us proud through their outstanding performance when we were labelled as underdogs and it is our believe that this is just the beginning of the great things to happen to the Flames,” said Chetama.

FAM General Secretary Alfred Gunda hailed Qurve Watches for the gesture saying: “We are grateful to Qurve watches for honouring their pledge and now we know that they did not make the pledge out of excitement, but they really meant it.

“This is very serious motivation to the team and now they know the importance of winning because everyone would want to associate with a winning brand. Having something customized will always put the players in the memory of what they have achieved at the 2021 Afcon and inspire them to perform better in the next competition,” said Gunda.

The Flames made history by making it to the knockout stages of the competition for the first time after failing to go past the group stages in their previous outings in 2010 and 1984.

The team lost 1-0 to Guinea in their first match played on January 10th before a 2-1 win against Zimbabwe on January 14th. Malawi finished their group stage campaign with a goalless draw against Senegal on January 18th, which earned them a spot in the round of 16 as one of the best third placed teams.

The Flames bowed out of the competition after a 2-1 loss to Morocco on January 25th.