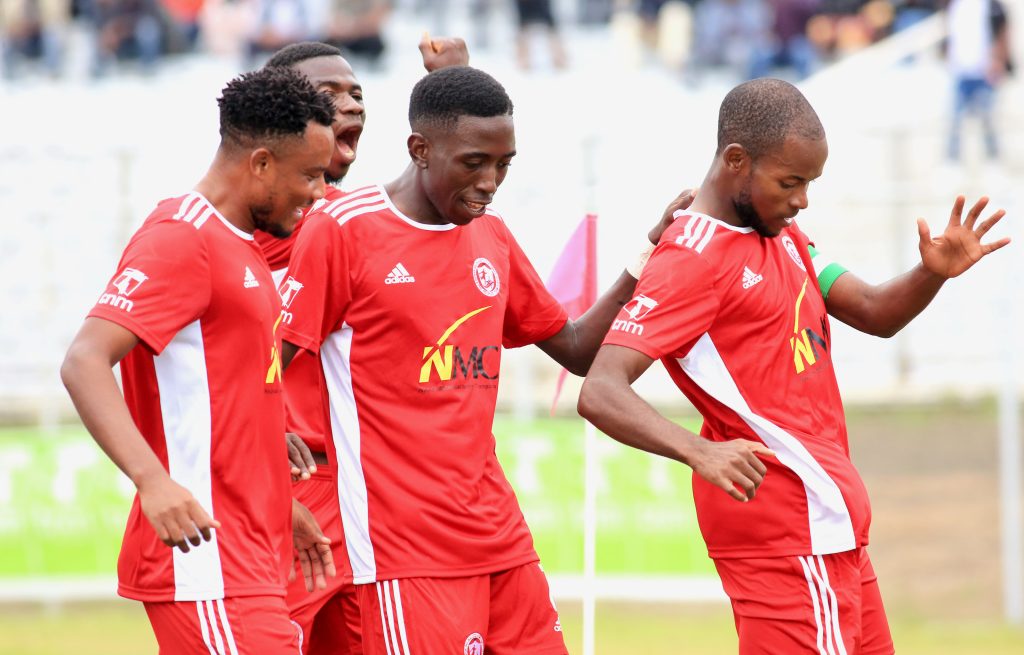 The first chance of the game fell to the Nomads in the fifth minute when defender Stanley Sanudi’s corner was parried in front of defender Ted Sumani by Bullets goalkeeper, Richard Chimbamba. But the Nomads defender chested the ball and hit his leg against a Bullets defender for a penalty shout which referee Alfred Kaphamtengo ignored.

The Nomads, playing as the away team on the shared venue, got their real chance of the game in the 10th minute when former Bullets striker Chiukepo Msowoya was allowed to sprint towards the Bullets goal but his low shot went begging off the Bullets’ goal.

In the 14th minute, Sanudi played a long diagonal ball from the right to winger Yamikani Chester who was completely unmarked on the left flank but the former Tigers midfielder wasted the ball.

The Nomads were made to regret that two minutes later when Flames international and Bullets Captain Chimwemwe Idana broke the deadlock in grand style. Striker Lanjesi Nkhoma received a beautiful pass from midfielder Henry Kabichi and the forward tried to take on Nomads defender Ted Sumani who disposed Lanjesi but conceded a corner kick.

Kabichi took to the corner flag to take the kick but instead of whipping the ball in the box, the former Nomad cut the ball outside the box to Idana who let out a fierce shot that could only be deflected into the net by a Nomads defender. The goal was however given to the 2021 TNM Player of the Year.

Kabichi, enjoying plenty of position alongside fellow central midfielders Blessings Mpokera and Idana could have made it 2-0 three minutes later when he curled another freekick just inches off Nomads’ right goal post after defender Precious Sambani was fouled just outside the box.

From then on, Bullets controlled the game with swift passing that earned praise from their supporters.

In the 43rd minuted, Idana was allowed to go past a forest of Nomads midfielders and defenders to feed Babatunde but the Nigerian misjudged his run and that was all for the first half.

Trying to chase the game, Wanderers technical panel were the first to react after the break, bringing in the midfield duo of Isaac Kaliati and Wisdom Mpinganjira for Chester and Kumwenda who was the Nomads’ liveliest player of the afternoon.

Kaliati would have made impact shortly after his introduction but the winger could not connect to a well weighed cross from Sanudi in the 62nd minute.

Eight minutes later, striker Babatunde thought he had put the game to bed when he found himself at the end of a swift team move orchestrated by substitute Enerst Petro but the striker was adjudged to have been in an offside position.

Wanderers then drew belief in their supporters in the 78th minute when  striker Vinicent Nyangulu header from a Ted Sumani’s corner hit the top bar and was judged to have crossed the line before Bullets defernders cleared it. It was a goal that could have been decided by the Video Assistant Referee (VAR) elsewhere.

From that minute on, the Nomads invaded the Bullets goal and looked to be the likely team to snatch the three points but their work was outdone by Bullets substitute Anthony Mfune who scored Bullets winner in the 84th minute with his first kick of the game seconds after being introduced.

Wanderers could have earned a draw in stoppage time after striker Chiukepo Msowoya set up midfieder Felix Zulu nicely with a headed pass but the midfielder, with all the time in the world, controlled the ball but ballooned his shot high up in the air like to condemn his team to their first loss of the season and second successive loss to Bullets at the Kamuzu Stadium after their 4-1 defeat to the People’s Team in the Airtel Top 8 Semifinals in December last year.

Elesewhere Kamuzu Barracks stunned Karonga United 1-3 at United’s own backyard in Karonga. The Soldiers scored their goals through Deus Mkuti, Chimwemwe Misambi and Gregory Nachipo while Khumbo Msowoya scored the only goal for Karonga United.

In Mzuzu, Ekwendeni Hammers were off to a flying start after registering a 2-0 win over Kasungu based TN Stars courtesy of goals from Wongani Lungu and Edgar Mgagana.