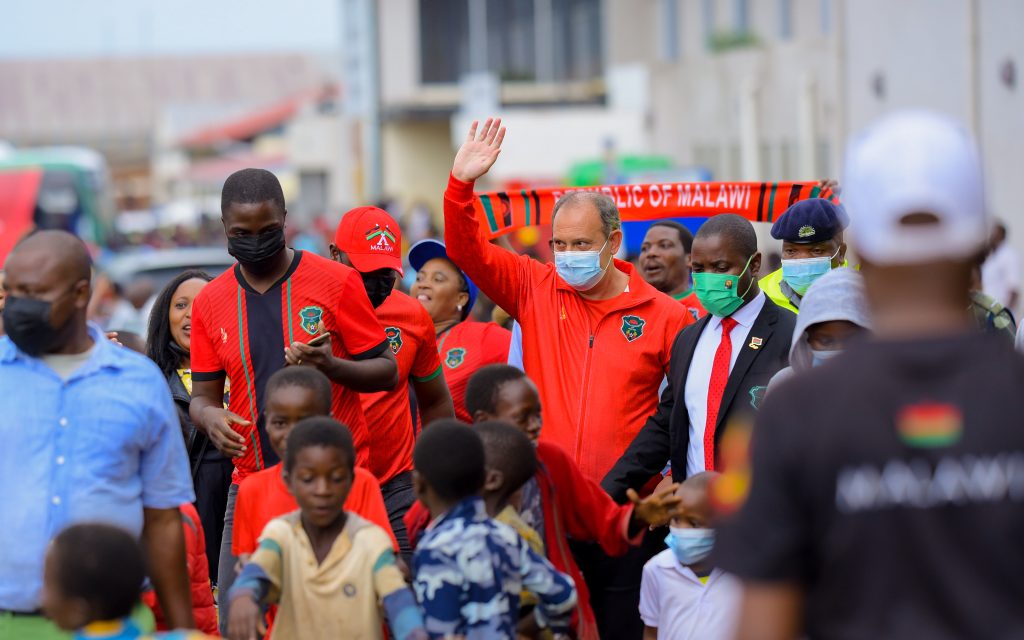 Heavy downpour could not prevent Flames supporters from welcoming their National team, the Flames, which jetted into the country on Friday afternoon from Cameroon where it was taking part in the African Cup of Nations.

By 13:30pm Chileka International Airport was filled with fans who were seen dancing and singing in the rains.

They had all the reasons to, as almost everybody wanted to be part of the people to welcome the team that had done the country proud by qualifying, for the first time, to the round of 16 of the competition

At exactly 14:34pm the first group of Flames players and officials arrived through Malawian Airlines.

Security officials had a torrid afternoon in controlling fans who wanted to get into the airport to welcome the team.

As desperation among supporters continued taking its toll outside the airport, the last group of players and officials finally landed at 15:39pm through Ethiopian Airways.

Dressed in red tracksuits, Flames players wore jubilant faces as they pushed their luggage trolleys to the arrival section.

Flames forward Gabadinho Mhango, goalkeeper Charles Thom, defender Lawrence Chaziya were some notable players that attracted the fans’ attention as they came outside the airport to get into an Flames branded coach.

Football Association of Malawi president Walter Nyamilandu, while praising the team for a spirited performance at the tournament, said football landscape has changed as there are no minnows in the game.

“We are thankful for the support. The game of football has changed as now the gap [between minnows and heavyweights] is narrowing. We went there with a different style of play where we were more direct, compact and hungry. It is not about the size of the team but hunger and passion that was in the team to make the country proud. They were at the tournament to make the country proud and money to them was secondary,” Nyamilandu said.

Mhango who banged three goals at the competition including a beauty against Morocco, said they will immensely benefit for participating at the tournament.

“It was a good experience to take part in the competition and we have learnt a lot. We are a good team, only that we lacked experience at that level to face those big teams. But our participation at the tournament will greatly benefit the team,” Mhango said.

The team later headed to Armallyis Hotel where it was supposed to be treated to a dinner.

Malawi lost 1-0 to Guinea in the opening game at the competition before defeating Zimbabwe 2-1 and drew with Senegal 0-0. The Flames were later eliminated after going down 2-1 to Morocco.