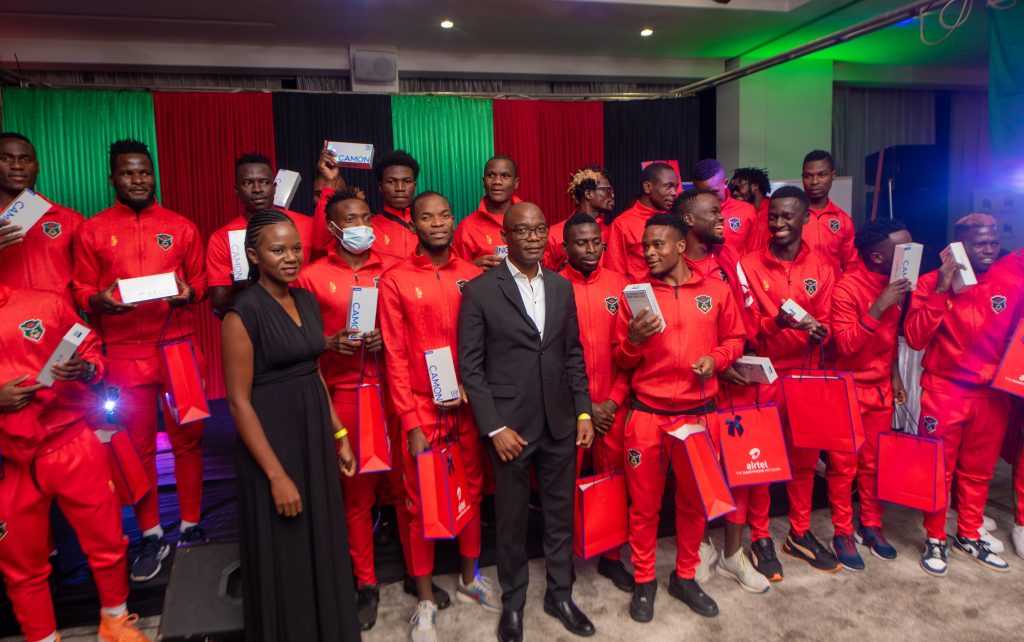 Mobile telecommunications company Airtel Malawi plc has given the Flames smartphones and Internet bundles worth over K10 million as a reward for their brave performance at the ongoing African Cup of Nations (Afcon) finals in Cameroon.

The reward to each of the 28 national football team players comprised a Tecno Camon-18i smartphone and a 40gb data bundle, which will be doubled if the players keep on buying and using Airtel airtime within the next three months.

Speaking when he presented the gadgets during the Flames’ celebratory dinner at Amaryllis Hotel in Blantyre on Friday evening, Airtel Malawi chief executive officer Charles Kamoto said they were proud of the Flames achievement. The Flames made it to the Afcon knockout stage for the first time.

“We are happy that despite exiting the competition, you managed to teach big teams a lesson with a gallant fight throughout your sojourn at the Afcon finals. As Airtel, we are proud of you and these smartphones are a reward for that,” he said.

In response, Flames captain Limbikani Mzava thanked the company for the support.

“We are very grateful to Airtel for this gift, which will motivate us to aim for greater achievements in future,” he said.

In his remarks, Football Association of Malawi (FAM) president Walter Nyamilandu urged companies and organisation to emulate Airtel Malawi plc and the Flames’ main official corporate sponsor FDH Bank plc by not supporting  the national team onky when it has achieved something.

“Airtel Malawi and FDH Bank have always been with the Flames right from the beginning of the Afcon campaign, yet others only show up when the team has done something,” he said.

Nyamilandu said the team has the potential to achieve greater feats if several companies and organisations joined hands to provide support right from the beginning of their campaigns.

“If they managed to put up a gallant fight with the little resources they had, what could happen if they have everything on the table?” he asked.

On his part, FDH Bank deputy managing director George Chitera, whose company has pledged to buy a state-of -the-art bus for the Flames, said they will try their best to make the Flames a winning brand.

Ministry of Youth and Sports Principal Secretary Oliver Kumbambe and Music icon Lucius Banda, who is also presidential adviser on youths and sports, said government was proud of the Flames for helping to promote unity and entertainment in the country during the Afcon finals.

During the dinner, Banda also performed one of his songs Nthawi, which prompted the Flames players to join him on stage. Lawrence ‘Lulu’s Khwisa and gospel musician Wendy Harawa also performed at the event.

At the Afcon finals, the Flames narrowly lost 1-0 to Guinea in a Group B opener before a 2-1 comeback triumph over Zimbabwe and a goalless draw against the continent’s highest rated side Senegal. The results helped them to qualify for the round of 16 for being among the four best third-placed teams from the group encounters.

However, they failed to reach the quarter-final stage following a 2-1 loss to highly-ranked Morocco.