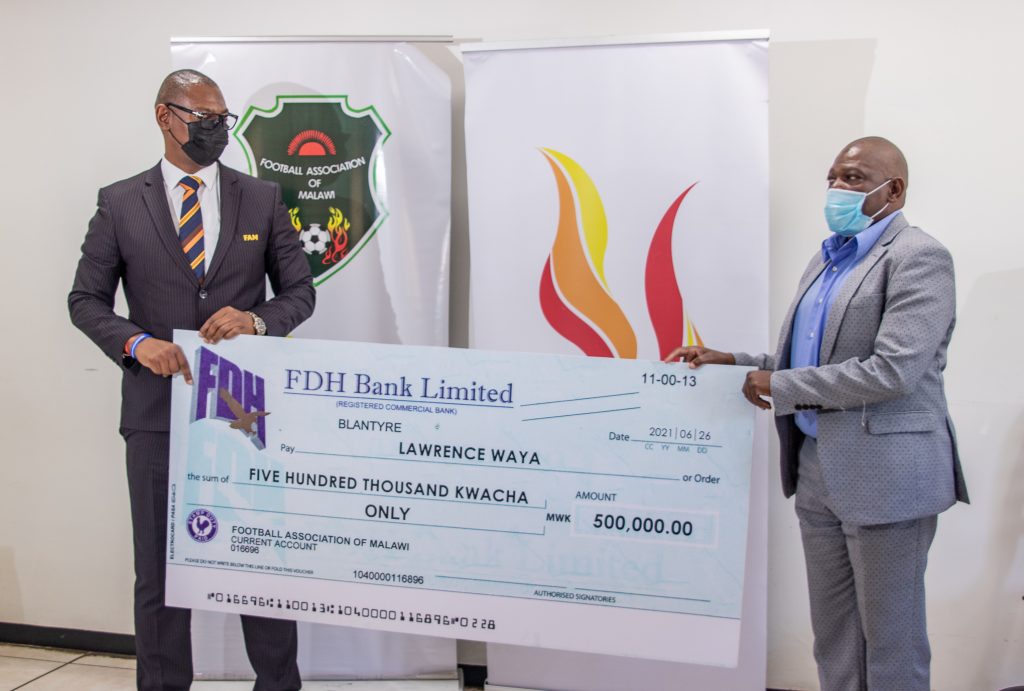 The Football Association of Malawi on Saturday honoured Flames legend Lawrence Waya for his service to Malawi football.

Waya, who is Malawi’s fourth most capped player with 132 caps and joint second all time top scorer with 27 goals, got a Certificate of Excellence and a K500,000.00 cheque during the Association’s Annual General Meeting at the Sunbird Livingstonia in Salima. .

FAM President Walter Nyamilandu said the three deserved the recognition for their service to the development of Malawi football.

“They have sacrificed a lot for the good of the game. Kaputa and Mtonga were loyal servants of the game and FAM. They deserved a ceremonial farewell.

“Kaputa has played a big role in laying youth football development and coaching structures.  Mtonga has groomed a lot of top referees in the country. We will continue to use them in our projects.

“For Lawrence, he is a legend. To me he is the best player the country has ever produced and we thought of recognising him as he is still alive,” said Nyamilandu.

Waya said he feels honoured to be recognised while he is still alive.

” I would like to thank FAM for the gesture. It feels good to be here and witness this while I am alive and I would like to urge FAM to do the same to more legends out there,” said Waya who played for the Flames between 1982 and 1996.

During the meeting the Congress passed the Association’s 2021 budget. The meeting also approved the FAM financial reports for 18 months ending 31st December 2020 which had a surplus of K159 million.

“We have been hit by COVID in the past 15 months and we suspended all football activities but we survived.

“Our revenues went up due to the FIFA COVID-19 grants and the auditors’ report shows that we managed the funds well which is good for the game.

“We have passed a new budget as we look forward to resume our operations on full scale,” said Nyamilandu.

January 19, 2023
PrevPreviousFAM President address at FAM AGM
NextMixed fortunes in FDH Bank Cup round of 32Next