FAM vows to keep the Cosafa U 17 squad 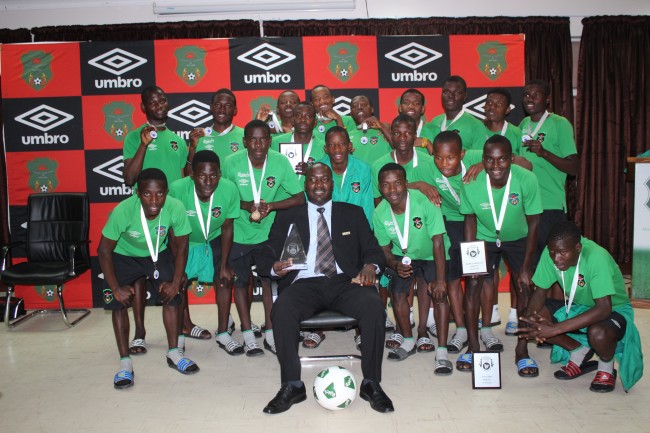 The Football Association of Malawi has vowed to keep and nurture the Malawi Under 17 squad that participated at the just ended 2016 Cosafa Youth Championship into a formidable senior national team.
FAM General Secretary Suzgo Nyirenda made the remarks at a press conference organised to officially welcome the team soon after it landed from Mauritius where it won bronze.
Nyirenda said the team, which has been together for less than three weeks, has shown great potential to grow into a strong unit can conquer Africa at all levels if it grows together.
“You are our heroes. Nobody have you a chance but you have proved us all wrong. As FAM we are happy with your achievements.
“In the past we have had such promising teams but we lost all the talent. But that will not happen this time around. We will keep and develop this group and even look for others more to supplement this project which in seven time should give as a strong Flames,” said Nyirenda who spoke on behalf of FAM Executive Committee Member Daud Mtanthiko.
He said FAM is talking to Cecafa to accommodate Malawi at the Cecafa Under 17 tournament to be held in Sudan in October.
“We will do all we can to expose this team to more international football. We will arrange for more international friendly games with North African countries who have been approaching us on several occasions but we could not commit as we had no team in place.
“The good part is Flames are out of all Major competitions and the available funding will not be channeled towards developmental teams,” said
Coach Decrack Msakakuwona thanked FAM for giving him and his backroom staff the opportunity to go to the Cosafa and asked the Association not to disband the team.
“These kids are so hungry to go far. All of them have what it takes to become senior international. It is now up to FAM to come up with programmes that will keep them together,” he said.
Vice-Captain Peter Banda, who won the top goal scorer award with five goals, said the exposure in Mauritius has changed their perception of the game.
“For most of us it was the first time going outside the country and playing at an international tournament. Football is huge and not what we see locally. We are now motivated to work hard and remain part of this system.
“We urge FAM not to kill this project as it happened with the past generations. We challenge authorities that if they support us we will not disappoint,” said Banda, son to former Flames international the late Chikondi Banda.
Below are the team’s statistics at the Cosafa tournament.
Match One Cosafa U 17 (GROUP B)
Friday 22nd July 2016
Port Louis, Mauritius
Malawi 2 Madagascar 1
Scorers: (Raphael Banda 50’, Frank Chizuze 89’)
Red Card: Chiwaya 67’
Line-up: Hastings Banda; Moses Chipanda,Henry Chiwaya, Haji Wali,Antony Msiska; Chimanga Kalinga,Francisco Madinga(Chizuze 73’),Peter Banda,Chifundo George(Chikhosi 85’),Lexpart Sumaili; Chikondi Mbeta( R. Banda 37’).
Substitutes: Patrick Njolomole, Emmanuel Kanthiti, Innocent Shema, Gift Phiri, Bernard Kayange, Lawrence Chikhosi, Frank Chizuze, Raphael Banda.

January 23, 2023
PrevPreviousCarlsberg Cup Update
NextThe Under 17 arrival from the Cosafa in picturesNext