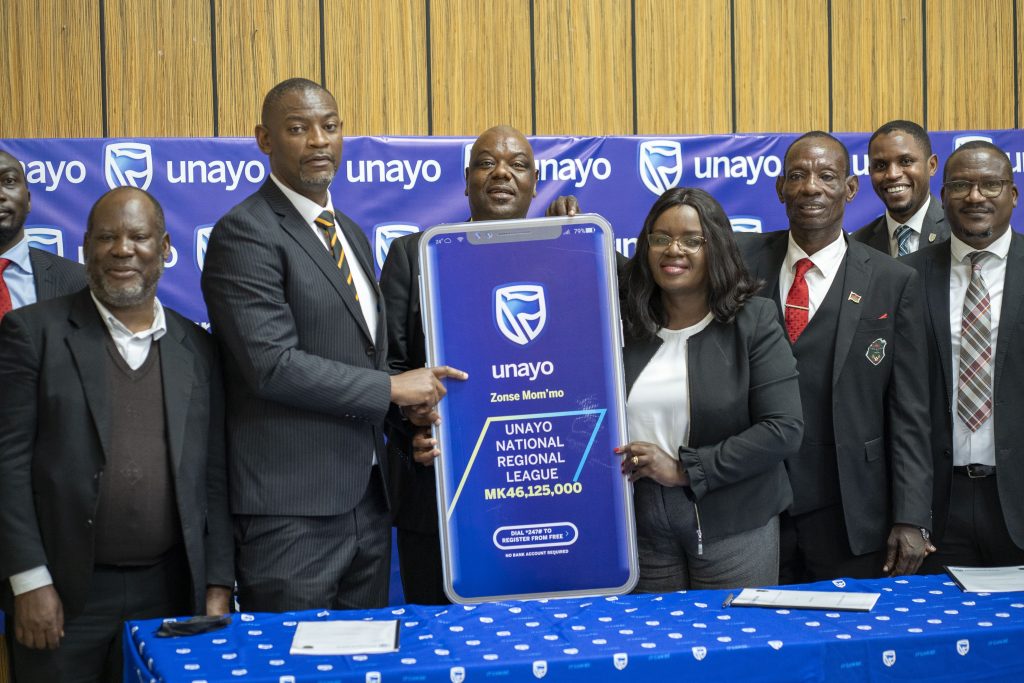 Standard Bank Malawi plc is back in Football after signing a three-year deal with the Football Association of Malawi (FAM) to sponsor regional Division One leagues.

The deal will see the bank pump K46.1 million a year into the leagues that will be played in all the three regions. The sponsorship will supplement the regional football associations sponsorships for their Premier Divisions which are their top tiers.

Unveiling the sponsorship in Lilongwe today, Charity Mughogho, Standard Bank head of consumer and high net worth clients said the company was excited to sponsor the competitions which will trade under their Unayo brand. This is the bank’s digital platform that connects people, businesses, and communities.

“The K46 million Unayo sponsorship will carter for winners prizes for the four teams in each of the three regional leagues, specifically providing support towards trophies, medals and match balls

“Unayo has also pledged to support the administration of the league and match officials. This has been done to raise the profile of the league,” she said.

FAM president Walter Nyamilandu was optimistic that the sponsorship will help develop football from the grassroot level, a the axis of his leadership.

“We have the Premier Division (first tier regional leagues) and Division One which have separate sponsorships.  We stand a very good chance of grooming new players that can take Malawi forward.”

“We have always wanted to have Division One but when we tried to persuade our current Premier Division league sponsor, we were told that they cannot support another division.

His Northern Region counterpart Lameck Khonje expressed hope that the sponsorship will strengthen their dream for the region to have seven teams in the Super League.

“We have not had a proper Division One. We had one previously but it was only participated by teams within Mzuzu and not the whole region.

“It has been our wish that we have seven permanent teams in the top league and we believe this sponsorship will help us achieve this dream,” he said.

He said: “Last year we launched the Districts Leagues which are funded by FAM, and these are now expected to be feeding into the Division One to Complete the Elite Football Bottom-UP Pyramid.  This structure ensures that our Leagues are competitive as it eliminates under performers ad promotes excellence.

“However, recently this Pyramid Structure was not being enforced fully due to lack of funding. The Northern Region has had no Division one for more than 6 years. The Southern Region also failed to run the Division One last year due to funding issues.

“The coming on board of Standard Bank will ensure that we consistently maintain the pyramid. The Leagues will take the format of the Premier Divisions Leagues in the respective region in terms of Numbers and format to ensure consistency,” said Alide.