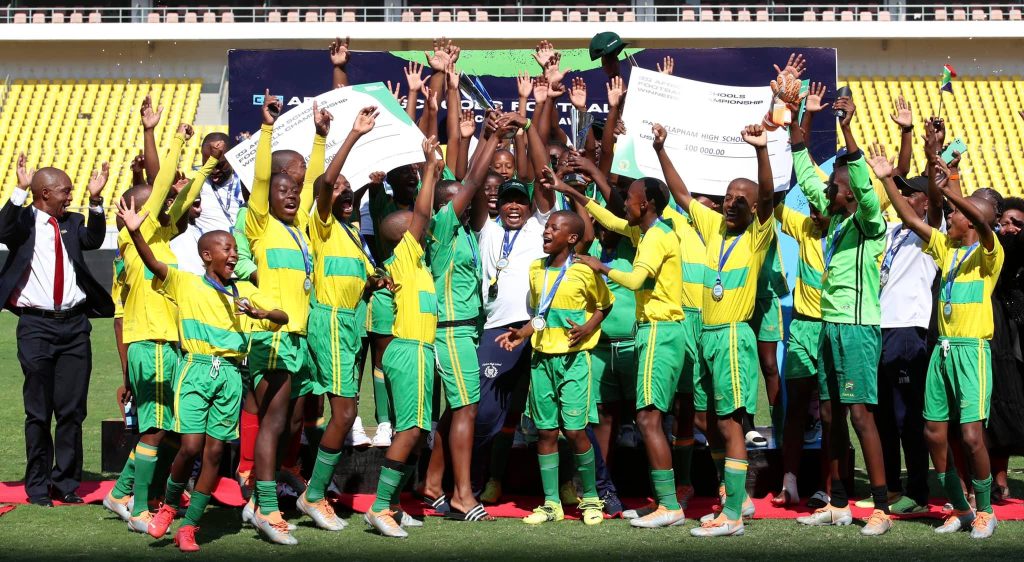 It was a South African double at the CAF African Schools Championship COSAFA Qualifier on Monday as teams from the country lifted both the boys and girls trophies in Lilongwe, Malawi and in doing so advance to the continental finals.

Clapham High emerged as the top boys team having had a slow start to the campaign, defeating Angolan outfit Rosinha 6-0 in their semifinal. Kgaogelo Monanyane was the hero as he scored a hattrick.

But there was an even greater feat from Salima Secondary’s Ishumael Bwanali in the other semifinal as he scored all the goals in the 4-0 victory over IQRA School from Comoros.

That set up a final clash between the home team and Clapham High, who triumphed thanks to a lone goal from Sibusiso Tolomane as he met a free-kick to slide the ball into the back of the net.

Ile Perseverance from Seychelles claimed fifth place, while the bronze medal went to Rosinha, who beat IQRA School 3-0 in the third-place play-off.

Monanyane won the boys’ Player of the Tournament prize, while Bwanali finished with the Golden Boot. Kamogelo Phokela from Clapham High claimed the Golden Glove for best goalkeeper and Rosinha claimed the Fair Play award.

Edendale Technical won the girls competition after they finished top of the round-robin league.

They had already clinched the title before the kick-off of their final fixture against Mothamo JSS from Botswana but ended in style with a 4-0 win.

Nobahle Mdelwa was among the scorers and she finished as the leading markswomen in the competition with seven goals. Asanda Ziqubu, Andiswa Zuma and Aphelele Mhlongo also found the back of the net.

The penultimate match in the girls’ competition saw Anse Boileau from Seychelles play to a goalless draw with GS Ningha of the Comoros.

Malindi had been in pole position to win, but were found to have fielded two ineligible players on the opening day on Friday, an error organizers believe was an honest mistake but which led to the side being stripped of two wins they had gained.

The Player of the Tournament prize in the girls’ competition went to Victoria Nkwala from Malindi, with Mdelwa winning the Golden Boot and Malindi’s Emily Maulidi the Golden Glove. Anse Boileau went home with the Fair Play award.

Aside from moving on to the continental finals, the winners in each category also collect a handsome first prize of $100,000, while the second placed teams were consoled with $75,000. The teams that finished third take home $50,000.

* Malindi Secondary had points awarded from two of their games to their opponents after fielding ineligible players.