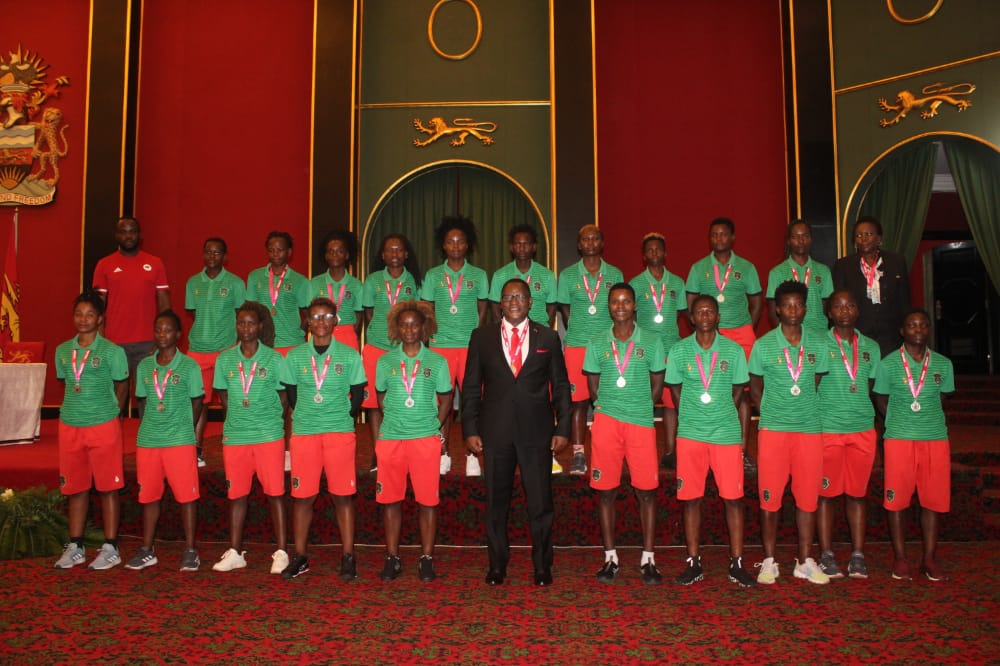 His Excellency the State President of the Republic of Malawi Dr Lazarus McCarthy Chakwera has hailed the Malawi National Women’s Football Team, The Scorchers, for their outstanding performance at this year’s Cosafa Women’s Championship.

Dr Chakwera on Tuesday afternoon hosted the Scorchers at the Kamuzu Palace in Lilongwe following their heroic performance in Port Elizabeth, South Africa where they reached the final of the tournament for the first time.

He said the team has made the nation proud and has committed his administration’s continued support to the team.

“You are history makers. Making it to the final for the first time is not a mean achievement and as a country, we are proud of you girls.

“As a leader, I strongly believe that if we all take your Cosafa achievement as a lesson, it won’t be hard to develop this country because something special will be happening where ever there is a Malawian since our performance will always be extraordinary,” said Chakwera.

The President has since urged the Scorchers not to be contented with the Cosafa outcomes but work extra hard as they prepare for the back-to-back 2022 Africa Women’s Cup of Nations qualifying games against Zambia later this month.

In his remarks, Minister of Youth and Sports Ulemu Msungama said while the government is doing all it can to develop sports in the country by among other things constructing international standard sports facilities, a lot need to be done hence the need for the private sector to come in and help.

Scorchers captain Madyina Ngulube thanked the President for hosting the team saying the gesture is a motivation to the team.

“We never imagined that we would one day be here with you your Excellency and we are delighted for being hosted at the State House for the first time ever.

“The team is comprised of very hard-working girls who like playing football even though they don’t get meaningful returns. As a team, we believe that we have the ability to make it even further if we are given enough support,” said Ngulub who presented a COSAFA Runners Up Silver Medal to the President.

The Scorchers finished second at the just ended Cosafa Women’s Championship in Port Elizabeth, South Africa after a 1-0 loss to Tanzania in the final.