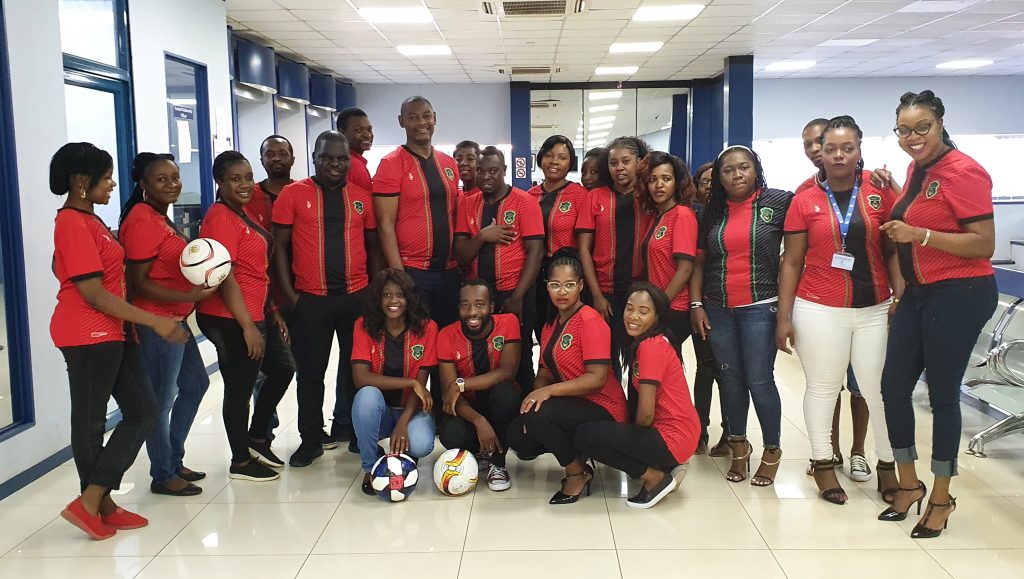 FAM President Walter Nyamilandu- Manda says he impressed with how FDH Bank has embraced the Flames qualification to next year’s Africa Cup of Nations Finals in Cameroun.

Nyamilandu said this on Friday morning when he joined the FDH Flames Friday at the bank’s Limbe Branch.

The FDH Flames Friday is a an initiative by FDH Bank, the Malawi National Football Team official sponsors, whereby all its employees are wearing Flames jerseys to work every Friday in the spirit of celebrating the Flames’ AFCON qualification.

Nyamilandu, who donned a Flames home jersey, took pictures and mingled with the banks staff and applauded the bank for setting the pace in building up momentum ahead of the Flames’ third AFCON appearance in January 2022.

“I am delighted with the Flames Friday initiative that has been launched by FDH Bank as the Sponsor of the Flames.

“It was buzzing today at FDH Bank, Limbe Branch as I walked in to take pictures with the members of Staff. I was also amazed with the excitement of their customers who have taken a great liking for the Flames. This is what we call patriotism at its best. It shows serious ownership of the sponsorship by FDH and how happy they are with the partnership.

“FAM is extremely proud of FDH Bank for being with us through thick and thin. Their investment in the Flames has finally paid off. At the end of the day, it’s the value for money that counts. I am glad that the Flames have lived to their expectations,” said Nyamilandu.

FDH Bank Limbe Branch Manager Penelope Mwale thanked Nyamilandu for honoring the event and said as a bank they are happy to be associated with the Flames.

“As the official sponsor of the Flames, we are happy with this milestone achievement by the National team, the team is a source of national pride. Our staff at Limbe branch and across the FDH group are excited to be part of FDH Flames Friday and they are already looking forward to next Friday,” said Mwale.

According to FDH Head of Marketing Levie Nkunika the initiative is important to celebrate Malawi’s feat having last qualified for the continental showpiece in 2010, Angola, having made it first in 1984 in Ivory Coast.

“FDH is celebrating the Flames’ achievement at the same time enjoying the fruits of their investment. FDH came in at the time when the Flames were not given a chance. Qualifying for Afcon is no mean achievement and this is worth celebrating in an extraordinary way,” he said.

FDH Bank has been the official sponsor of the Flames for the past six years now with a yearly package of K60 million.   The bank also spoiled the Flames with K100,000 investment account to 30 squad players as token of appreciation for the last month’s 1-0 win over Uganda that sealed AFCON qualification.