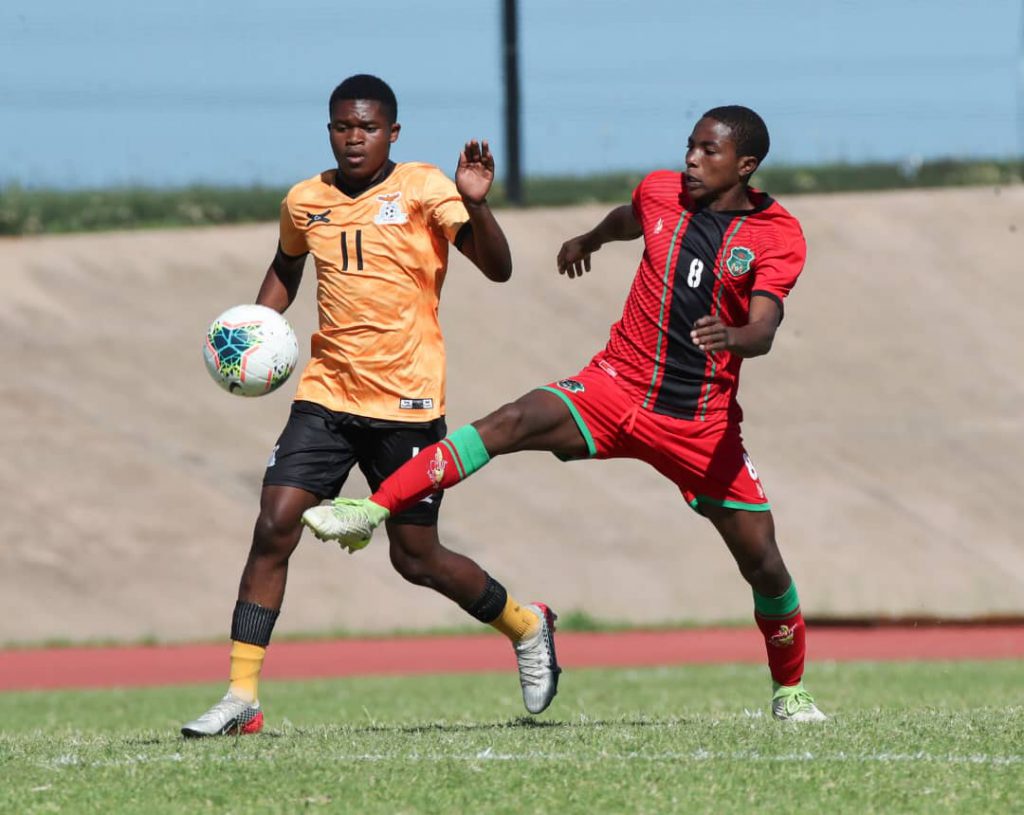 Malawi’s chances of qualifying for the 2021 Africa Under-17 Cup of Nations are hanging in balance after the team’s 6-2 loss to Zambia in the ongoing COSAFA Under 17 Championship on Tuesday.

With the win Zambia qualified for the final of the 2020 COSAFA Men’s Under-17 Championship which is being used a reginal qualifier for the continental showpiece.

Zambia’s Joseph Banda stole the show with a hat-trick of goals.
Banda got his first in the 11th minute after scooping the ball up and over the wall with the young Chipolopolo making good on a set-piece, beating the Malawi keeper Mhone with the ball nestling its way into the back of the net.

Rickson Ng’ambi profited from a well-timed run thanks to the boot of Lombe Mutale, who sent a long-ball into the opponent’s attacking third which the former buried for his side to pull 2-0 ahead. Banda was again on the scoresheet as Zambia went into the break 3-0.

Charles Mumba got his first of the match and Zambia’s fourth immediately after the restart before an on-fire Banda seized the chance for a hat-trick after he getting on the end of another through-ball to the right of the Malawi goal, and calmly chipping it over the keeper.

Two goals in succession reduced the deficit as Mphasi got in on the action, driving the ball past a flailing Makungu for the first and getting on the end of a neat-looking cross from James Chomba with the Zambia defence looking in all sorts for the second, as the game approached the last quarter.

Teddy Khumalo would get his name on the scoresheet with a looping shot into the back of net to leave Mhone well-beaten as the champions got their sixth to all but seal the match with only the final to come.

The win means Zambia will finish in the top two in the four-team mini-pool, enough to reach Sunday’s final, and so they have already earned their spot in Morocco at the continental finals next year.

The Junior Flames or South may join Zambia after final round of pool matches to be played simultaneously on Thursday, with both kicking off at 15h30.

South Africa will need just a point against Zambia to ensure their place in the final, though even a defeat could leave them qualified on goal-difference.

They are three points ahead of Malawi on the table, and assuming South Africa lose to Zambia and Malawi beat Angola, the Junior Flames would still need to make up a five-goal swing.

That is because the match between the two finished 2-2, which means head-to-head record is not applicable to separate them.

It will come down to goal-difference, and with South Africa currently on +1 and Malawi on -4, the latter have it all to do.