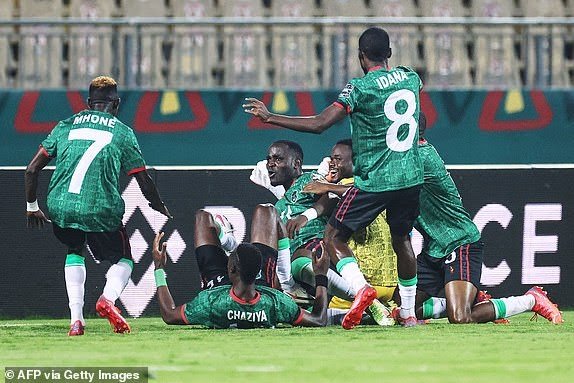 Malawi National Football Team, the Flames are out TotalEnergies Africa Cup of Nations (AFCON) 2021 after going down 2-1 to Morocco’s Atlas Lions at Ahmadou Ahidgjo Stadium in Yaounde, Cameroon.

Frank Gabadinho Mhango put Malawi in the driving seat on the seventh minute but the North Africans equalised in the first half added on time through Youssef En-Nesyri before Achlaf Hakimi scored the winner in the 69th, sealing Malawi’s fate and booking a place in the quarter-finals.

The AFCON exit means Malawi failed to break another record of reaching the competition’s quarter-finals for the very first time.

The Flames qualified to the last 16 at the expense of giants such as defending champions Algeria and Ghana who fell along the way.

In this encounter the Flames, were out to prove that they deserved a place in the quarter-finals and went to embarrass Morocco within seven minutes.

They repsonded with a pre-emptive all-out onslaught which only left them open on counter.

Actually, Gaba should have grabbed a brace but his shot after being set by Micium Mhone went slightly wide on the right.

The Moroccans came wave after wave but thanks to the heroics of goalkeeper Charles Thom who frustrated Sofyan Amrabat, Imran Louza, Sofiane Boufal, Selim Amallah, Ayoub El Kaabi and Youssef En-Nesyri who kept coming like a swam of bees.

But just when it looked like the Flames would hold on to the lead at half time, they conceded a free kick which allowed Youssef En-Nesyri to head past Flames goalkeeper Charles Thom.

After half time Flames head of technical Mario Marinica brought in Richard Mbulu for Khuda Muyaba.

But there was little change upfront where Malawi failed to create clear cut scoring opportunities.

Consequently, Morocco continued dictating the pace and tempo of the game.

They forced Malawi to play long balls, which were easily dealt with by the enemy’s towering back four of Achraf Hakimi, captain Romain Saiss, Nayef Aguerd and Adam Masina in defence.

The Moroccans grabbed the winner in the 69th minute, this time Hakimi curled in a free kick from 25 metres, beating both the Flames defence wall and Thom.

The goal further threw Malawi’s game plan into confusion and the Romanian had to make three more changes to avert the situation.

Though sanity seemed to return, it was too little too late as Morocco used their experience to held on to the lead and qualify to the quarter-finals, unbeaten from group stage.

They registered a 1-0 victory over Ghana in their opening match, 2-0 win over Comoros in their second match and tied 2-2 with Gabon in the last one.

It was the 11th time for Morocco and Malawi to clash since 1985. The North Africans have won six of the matches while the Flames have won once.Three encounters ended in draws.