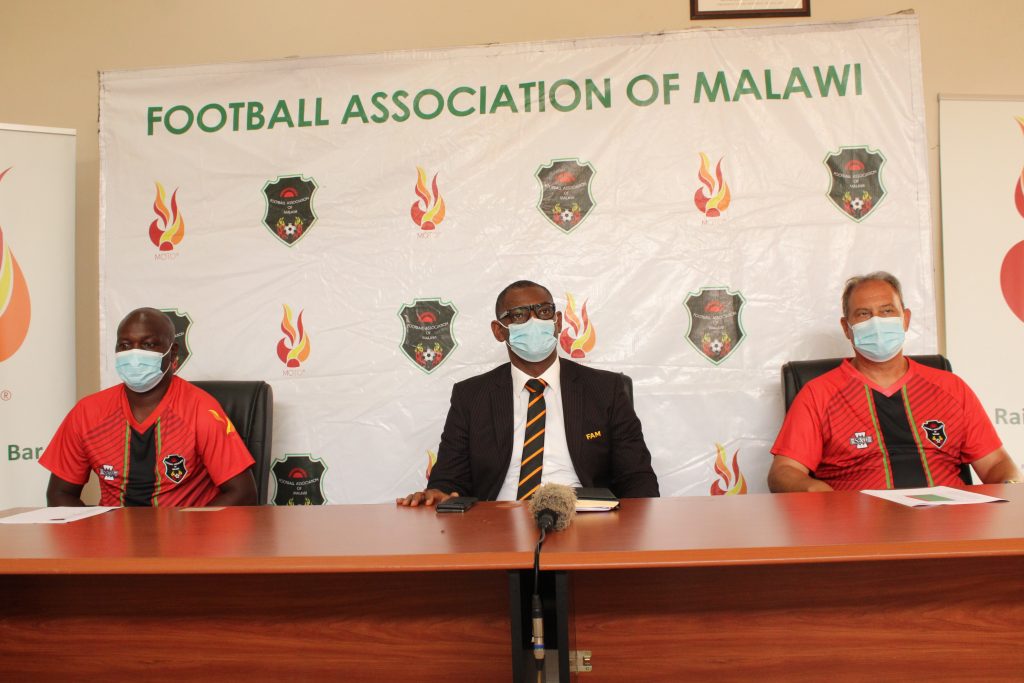 The Football Association of Malawi has appealed to Malawians to help raise the K154 million deficit in the Flames AFCON budget.

Speaking when he addressed the press at the Mpira Village on Wednesday morning, FAM President Walter Nyamilandu said the association has raised about K524.5 million against the budgeted K679 million hence the need for well-wishers to bail out the association.

Nyamilandu also disclosed that the Flames are on Thursday afternoon leaving for a ten-day camp in Saudi Arabia where they will play two international friendly matches.

“Having entered into a technical partnership with Saudi Arabia, we accepted an invitation for the Flames to Camp in Saudi Arabia ahead of the TotalEnergies Africa Cup of nations with all the cost borne by the hosts.

“The Flames will play friendly matches against Mali and Comoros while in Saudi Arabia and there is a possibility of playing friendly matches with local clubs before leaving for Cameroun on January 4th in readiness for our first match against Guinea on January 10th.

“Though we did not perform well during the World Cup qualifiers, we are expecting to showcase a different team that is renewed, progressive and dynamic with a winning mentality. We know we will be facing tough oppositions but we are determined to defy the odds by challenging ourselves to break new grounds in Cameroun.

“We would also like to take this opportunity to account for the resource mobilisation drive that FAM embarked on to ensure the Flames’ participation at AFCON is not only a reality but smooth as well.

“The total budget is projected at K679 million and the projected funds from the fundraising activities is K100 million while Saudi Arabia has contributed about K157 million which includes Air tickets, food and accommodation for the team’s camping in Saudi Arabia. FAM has contributed K103 million for the purchase of the team’s travelling equipment, game kits, casual wear and other things needed in Cameroon while K165 million has been reserved bonuses giving us a total of K524, 538,000 against the budgeted K678, 869,000. This means we have a deficit of K154 million.

“Though we are faced with such a deficit, we are going ahead with our preparations for AFCON hoping that new donors will open up as we reach out to our traditional sponsors Malawi Government, our official sponsor FDH Bank and donors CAF and FIFA and Malawians for a bail out.

“For this reason, I would like to appeal to all Malawians of good will to come forward to partner with the Flames at this time of critical need,” said Nyamilandu.

Nyamilandu has since hailed the Flames Afcon resource mobilisation taskforce for a job well done in raising funds for the team.

“The taskforce has done a commendable job in raising such significant sums of money in the history of Malawi football. They have shown patriotism and commitment to national duty by sacrificing their precious time and resources to make the fundraising campaign a success. They did all the spadework to provide us with a starter pack otherwise it could have been a very difficult campaign to venture into,” said Nyamilandu.

Meanwhile, Flames head of technical panel Mario Marinica has named a 30-member provisional squad that will travel to Saudi Arabia. The team will travel in two groups with the first one leaving on Thursday afternoon while the other will leave on Friday.