Central Region on Sunday emerged champions of the inaugural FAM Under 20 National championship after winning all their matches at the two-day event held at Mangochi Stadium over with weekend.

North finished third with three points with a single win over South who finished bottom with just a point.

The event was aimed at giving a platform for Under 20 Coach Patrick Mabedi and his panel to select players for the Under National team and he said he was impressed with the talent he saw.

“I am satisfied with the quality of the players that we have picked . I am particularly impressed with height of most of the lads and we will have a strong team that will ably compete at international level.

“I should thank FAM for the exercise because this how players are identified elsewhere.  We had a group of 80 players and we will come up with a squad of 30 players who we will announce in due course and from here we plan to hold a training camp soon,” said Mabedi.

FAM President Walter Nyamilandu said the Association has changed the strategy for identifying talent to ensure players selected remain in the team for a minimum of two years.

“In the past we would do this exercise three weeks before a tournament and selected players just for that particular tournament. But now we are targeting players that will be with the team up to 2023 for the AFCON .

“This means Mabedi and his panel have a year and a half to work with these boys before the AFCON qualifiers in December 2022. But the door is not closed for other players who did not come here. Every player who is good enough and is within the age bracket whether they play in Super league or outside the country will be considered for selection,” said Nyamilandu.

Malawi is set to participate at this year’s COSAFA Youth Championship to be held in South Africa in December.

Next’s years COSAFA Championship will be used as a qualifier for the 2023 Under 20 Africa Cup of Nations.

All the Results at the FAM Under 20 Championship 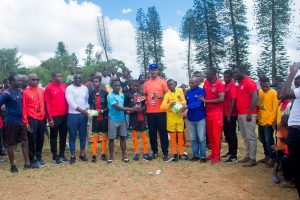 June 24, 2022
PrevPreviousNgwenya ruled out as Flames leave for Cameroun.
NextSulom, FAM disappointed with Elite clubs for shunning U20 playersNext