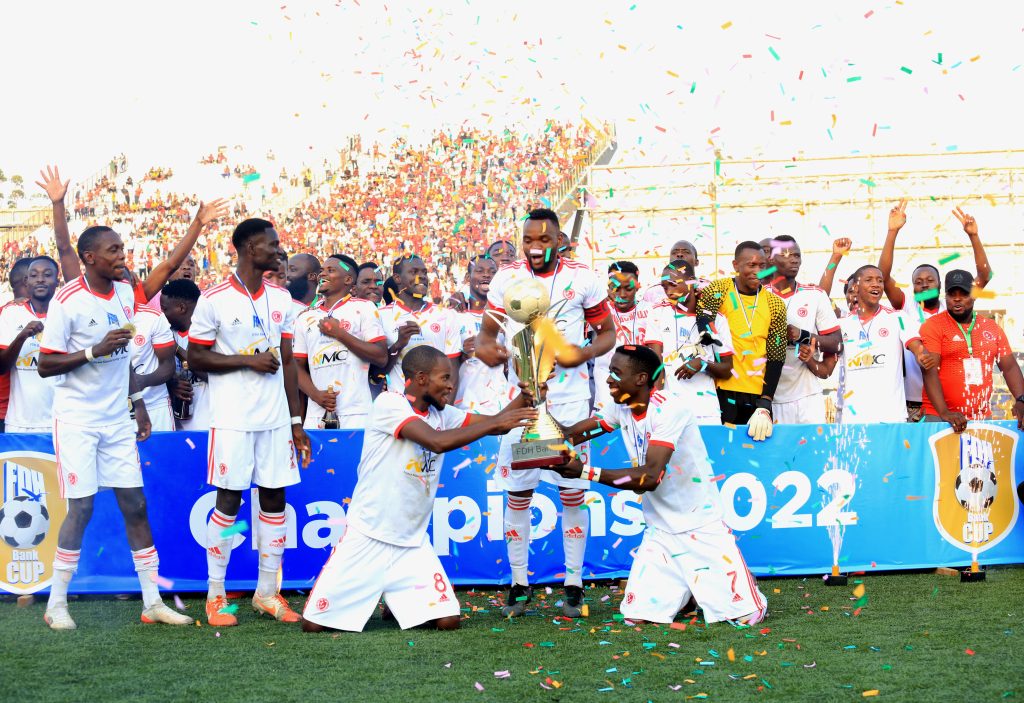 The final which saw the senior team facing off with their juniors, surpassed expectations as the juniors proved why they knocked out TNM Super League outfits Red Lions, Mighty Tigers and Red Lions on the way to the final.

The match pitted experience from the seniors against talent from the juniors.Since both teams play the same style, it boiled down to tactics which the two teams’ technical panels employed.

His counterpart Callisto Pasuwa, had to counter Chatama’s tactics.Knowing that a fast-paced game would not suit his senior players, he opted for slow build ups through his usual campaigners Chimwemwe Idana, Gomezgani Chirwa, Precious Sambani, Patrick Mwaungulu, man of the match Frank Willard and their marksman Babatunde Adepoju.

The match was a balanced affair though the seniors used experience to survive.

They were first to score through Nigerian striker Babatunde Adepoju in the 13th minute.

Reserves goalkeeper Ramadan John and his defenders miscalculated their movements and collided, allowing Babatunde to guide the ball into the net from Chirwa’s assist, with the keeper lying in agony.

Many felt the referee should have interfered, but the goal still stood.However, the goal did not discourage Reserves.

They kept their cool and played their lungs put. Emmanuel Saviel could have levelled the scores, but his shot went straight at Clever Mkungula in Bullets goals.

The got the much needed equaliser in the 45th minute through Mphepo.

Reserves won a free kick on the age of the box and Yasin whipped it into the box.Mkungula dealt with the first shot but Mphepo buried the second attempt to level the scores going into recess.

With Mwaungulu failing to match the pace of his fellow youthful players from Reserves,  Pasuwa decided to take him off.

He also substituted Lanjesi Nkhoma who was also struggling.In came in form midfielder Ernest Petro and Stanley Billiat to stabilise the Bullets attack.

This paid off as Bullets now took control of the midfield.John had to come to Reserves rescue to stop Anthony Mfune’s powerful header for a corner.Chatama made a costly substitution taking off Yasin for Macray Chiwaya.

Soon after Idana restored Bullets lead after he was set by Chirwa in the 66th minute.Striker Mfune sealed Bullets the silverware in the 77th minute heading in an outswing from impressive Chirwa.

Another substitution by Chatama came in the 78th minute when he brought in Bahat Rafic to replace Felix Demakude.He also introduced Wongani Kaponya who replaced Aaron Chilipa.

Bullets on the other hand took out Babatunde who has won the Golden Boot Award with five goals, for Hassan Kajoke.

By then Bullets had completely taken control of the match.

They tossed the ball around as the Reserves were taught a lesson by their elders. For being champions, Bullets pocket K25 million while the runners up cart home K7 million.