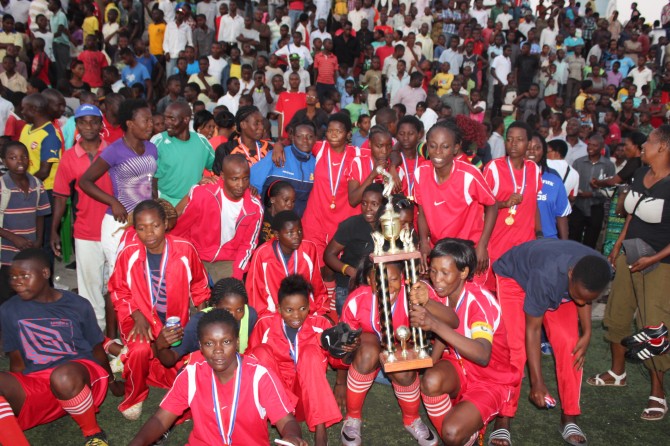 Blantyre Zero have  won the inaugural the Southern Region Women Football Association (SRWFA) League.
This follows a barren draw against rivals Ntopwa Super Queens at Mpira Stadium in Chiwembe, Blantyre last weekend.
Ntopwa, who have a game remaining before they wind up the season, needed a convincing win to have realistic hopes of snatching the title from Blantyre Zero.
Zero have 40 points from 14 games while Ntopwa are now second with 34 points from 13 matches.
Zero’s owner Maggie Chombo-Sadiki expressed delight at retaining the title.
“Obviously, I am very excited. It was a tough season that we went down to the wire and Ntopwa gave us a good run for our money.
“I congratulate my girls and, of course, the technical staff for giving out their best throughout this campaign,” said Chombo-Sifiki.
Ntopwa team manager Isaac ‘Jomo’ Osman said with an ounce of luck, his team could have won the title.
“But we will come back stronger in the coming season,” he said.
Zero striker Temwa Chawinga won the Golden Boot Award with 42 goals. Mwayi Zimba and Vanessa Chikupira of Ntopwa are second and third best scorers with 19 and 18 goals, respectively.
Dreams United beat Blantyre Hotspurs 3-0  to finish third on the log table with 22 points.
Bangwe Super Queens are fourth with 19 points and remain with an encounter with Chikwawa Sisters to complete their fixtures.