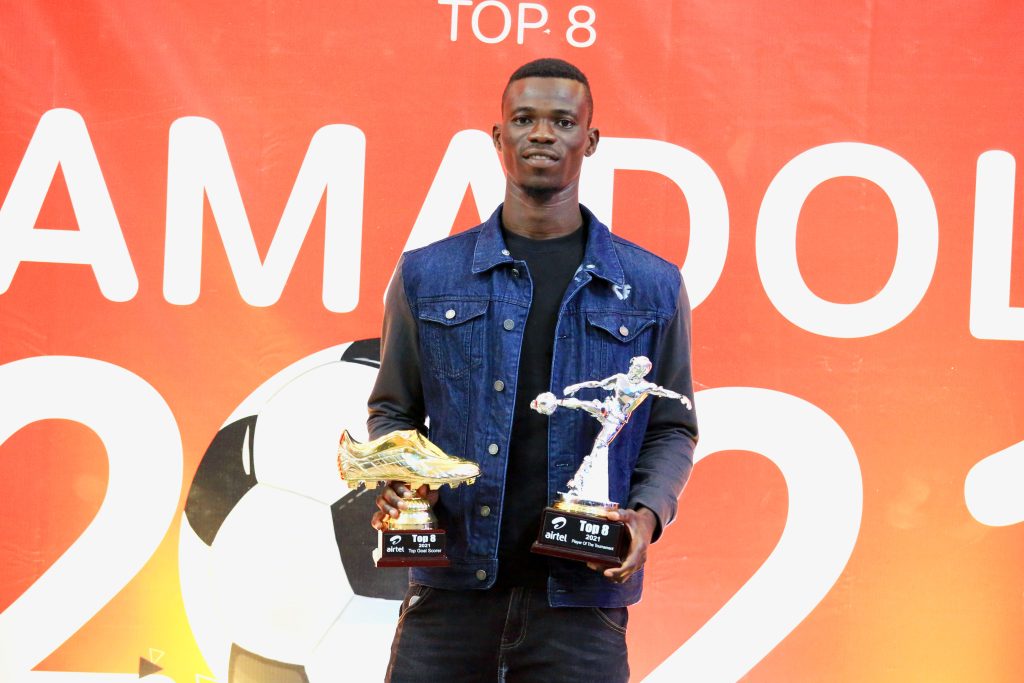 Nyasa Big Bullets striker Babatunde Adepoju was the Star of the night as he scooped two individual awards at the Airtel Top 8 Season 4 awards ceremony at Mount Soche Hotel in Blantyre on Wednesday.

Adepoju made history with his 8 goals in three games to win the golden boot breaking the record of three goals set by Khumbo Ng’ambi in 2017.

He was als voted Player of the tournament beating his teammate Lanjesi Nkhoma and Silver Strikers’ duo of Stain Davie and Zebron Kalima.

The Nigerian forward was all smiles for winning the two accolades.

“I have been playing in Malawi for the past five years and this is my first proffessional award. I don’t take this for granted but all thanks to my Club, Coaches and teammates for the support,” he said.

“During the competition we rolled out the Competitions Management System and the Mpira TV which  gave a chance to alot of people to enjoy football in the comfort of their homes”, said Alide.

In his remarks, Airtel Malawi Managing Director Charles Kamoto said his company was impressed with the competition as it gave a true reflection of the  ‘Zamadolo’ theme.

“Zamadolo was an ambitious project where we looked at what the participating teams had achieved before and we wanted to set the tone to achieve more which eventually happened. We appreciate the support we got from FAM and the Media and we look forward to how the season 5 will look like,” said Kamoto.

“The competiton brought alot of new things and I believe the ‘zamadolo’ theme was prophetic. Nyasa Big Bullets won the championship for the first time and our Technical Director, who was new by the time we were preparing for Afcon  used the Top 8 to identify new talent for the Flames and we all saw what happened in Cameroon,” he said.