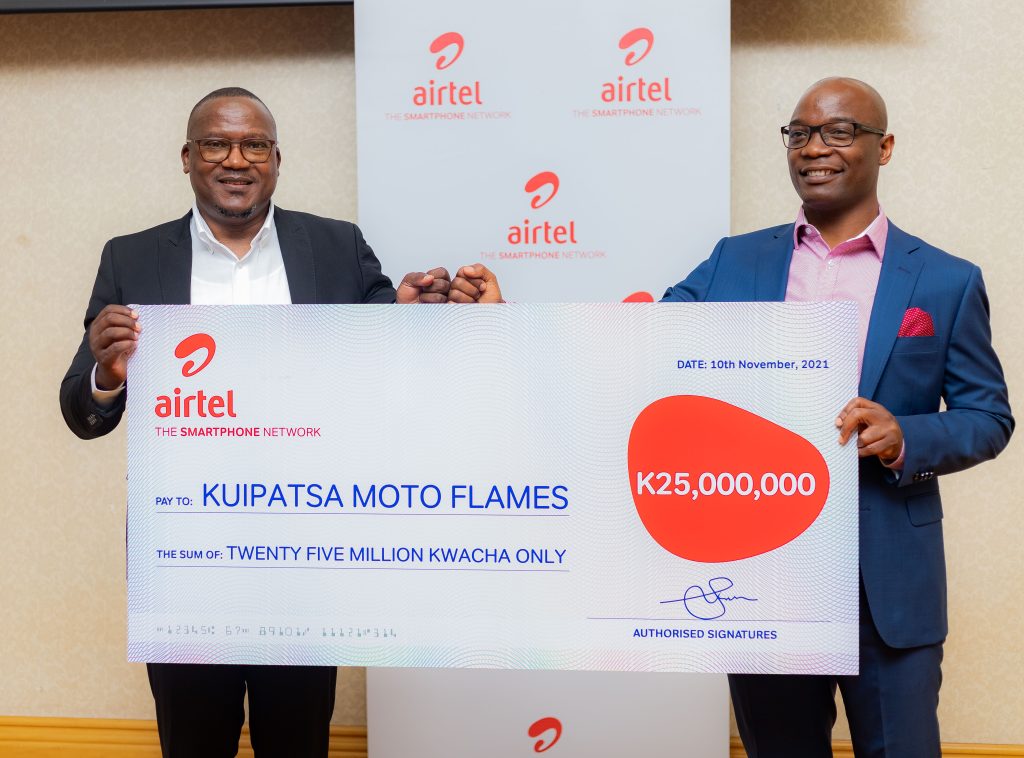 The Company’s Managing Director, Charles Kamoto, announced this in Lilongwe on Wednesday.

According to Kamoto, K2.5million is for the Kuipatsa Moto Golf Tournament that was held last month and another K2.5million towards the VIP Moto Fundraising Dinner yet to take place. K20 million is for general purpose for the Flames.

Airtel Malawi Managing Director Charles Kamoto said as a company in the connection oriented business, the power of connecting others continues to drive their activities.

“For us at Airtel, football is one avenue that we continue to be passionate about, as it has proven, time and again, to be the official love language and ultimate connector for Malawians.

“And so, ladies and gentlemen, coming off the heels of yet another successful Top 8 Season 4 kick-off over the past weekend at Kamuzu Stadium, I am excited to announce our support for the Flames AFCON ‘Kuipatsa Moto’ fundraising drive to the tune of K25 million,” he said.

Kamoto added: ” With football being next to religion in Malawi, we can attest to the ultimate connection and unity that this sport continues to achieve in Malawi,” Kamoto said.

“We and hope that our contribution to the Flames to take part in the upcoming AFCON games will not only ease some cost-related burdens but also help to elevate the sport.

“To the Flames, team Airtel wishes you all the best with the preparations for the upcoming games next year. And to FAM, thank you for always considering us as a partner.”

In his remarks, chairperson of the Flames resource mobilisation taskforce, Justice Jabbar Alide — who is also FAM first vice-president — said this was one of the best days as it is a single most contribution made towards their campaign rolled out some few months ago.

He said : ” We still have a big shortfall towards their target as currently they must be hitting towards a K100 million if their targeted K350 million towards the close of the campaign but we are was optimistic of meeting the target as they still has so many pledges that are yet to be honoured.”

The Flames’ AFCON finals budget — pegged at K1.5 billion (about US$1.8 million) — would in part be funded by the government as well as Flames official sponsor, FDH Bank with participation subsidy from world governing body, FIFA.

At the Cameroon 2022 AFCON, the Flames are grouped alongside Senegal, Guinea and fellow Confederation of Southern African Football Association (COSAFA) member, Zimbabwe.