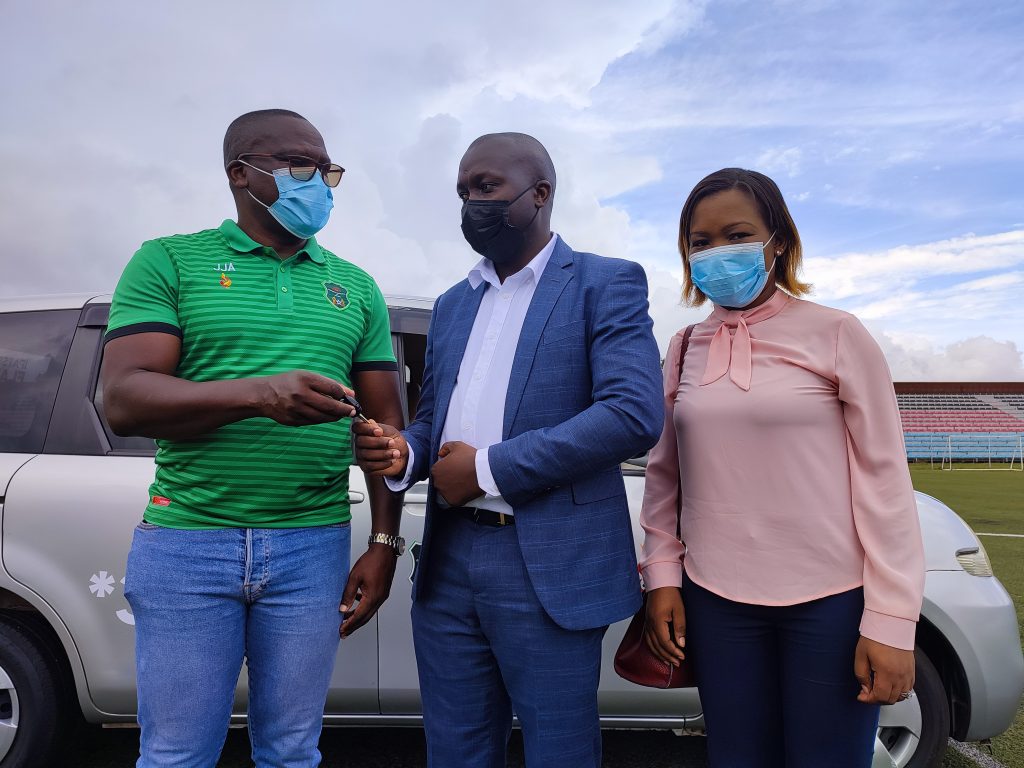 The Flames Afcon Resource Mobilisation Taskforce has hailed Malawians for supporting the team’s Afcon participation through the various fundraising initiatives that the taskforce run between October and December 2021.

FAM Vice President, who is a the taskforce’s chairperson, Justice Jabbar Alide said this on Thursday morning when he handed over a Toyota Sienta to Ronald Gomani, who emerged the grand winner in the ‘Ipatse Moto Flames and win’ initiative.

Justice Alide said though the ‘Ipatse Moto Flames and win’ initiative has not raised much funds as expected, the taskforce is happy that the initiative brought Malawians closer to their national team.

“Since we began fundraising for the Flames in October, we made a commitment that we will be conducting crowd funding initiatives where people were to be contributing the little that they have to their national team and get different prizes.

“It has been a wonderful experience fundraising towards the Flames’ Afcon participation with both highs and lows but we are happy that all have ended well and today we hand over the grand prize to Mr Gomani.

“On behalf of the taskforce, I would like to take this opportunity to thank government, corporate partners, and all the people who rendered their support towards all the fundraising initiatives that run.

“It wasn’t an easy task for us because time was not on our side and at the same time the situation on the ground wasn’t conducive because of the economic hardships that came with the Covid-19 pandemic. But we are very happy that the initiatives were supported and we are sure that should the same need arise in the future, people will come in and support us,” said Justice Alide.

Alide disclosed that the taskforce has raised about K156 Million and over half of the money has already been submitted to FAM.

Gomani, who works for Electricity Generating Company (Egenco), said he was very happy to have emerged the grand winner .

“As a patriotic citizen, I wasn’t expecting anything in return when sending the money to the *3089# because I only wanted to help the team’s participation in Cameroon.

‘I am the happiest person in the world and I will be using the car for domestic purposes to ease some mobility challenges that I had at home.

“I would like to urge Malawians to be patriotic and take part in helping our nation whenever need arises because I believe that together we can achieve something great. To the Flames, I wish them the best of luck in Cameroun,” said Gomani.

Apart from the ‘Ipatse Moto Flames and Win’ initiative, the  taskforce also held a fundraising golf tournament which was presided over by the State Vice President Dr Saulos Klaus Chilima in October and a VVIP Fundraising Dinner hosted by the State President Dr Lazarus McCathy  Chakwera at Kamuzu Palace in November.

The Flames, who are in Group B alongside Guinea, Zimbabwe and Senegal, arrived in Cameroon on Wednesday afternoon ahead of the continental showpiece which kicks off on Sunday January 9th.

Malawi will begin their Afcon campaign with a match against Guinea on January 10th before meeting Zimbabwe on January 14th. The Flames final group stage match will be against Senegal on January 18th.